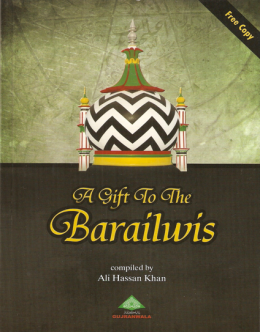 Umm-ul-Qura Publications has prepared a Booklet, entitled “A Gift for the Brawliyah”. We have Al Hamdulilah published 3000 copies for free distribution in the UK and we hope to publish more. www.umm-ul-qura.org

Barelwi is a book about the Barelwi sect which appeared at the end of the nineteenth century in the indian peninsula and it contradicts the islamic legislation ,the quran and sunnah not only in the branches but also its fundemental creeds attack islam completely.They consider anyone opposing the opinions of their immam as a disbeliever.The book includes five 5 chapters:it’s history,creeds, teachings, disbelieving fatwas and mythical stories

He (Ahmad Reza Khan founder of the Brelwi sect) used to narrate the Shia traditions and circulated them among the Sunni’s, here we will mention a few.

he said:
“Ali will distribute Hell on the Day of Judgement” (1)

Another tradition says:
“Fatimah was named so, for Allaah has protected her children from fire.” (2)

He said:
“The order of the helpers of the people (ghawth) and those who are called for help begins with Ali, ending at Hasan al-Askari, the eleventh Imam of the Shia”.(3)
He produced the same chain which coincides with that of the Shia Imams!

He said:
“Ali removes calamity and obliterates misery from him who recites the well known Saifi supplication, seven or three times, or only once”

The supplication is as follows:
“Call ‘Ali for help who is the manifestation of wonders; you will find him a helper to you at the calamities.”
“Every calamity and the misery will be gone by your protection, O ‘ALI O ‘ALI.” (4)

He wrote:
“There is no problem in having a replica tomb of Hazrat Husayn in your house for the sake of blessing”. (5)

from the works of Shaykh Ehsan Elahi Zaheer Rahimaullaah

The rabid soofee Gibril Fouad Haddad in his born again soofee book, ‘Albani and his friends’ quotes from one Fadl al-Rusul Badayuni the soofee church father and what a great history he had we will mention his affair in detail in this series when we get to the stage of answering his book in great detail, but for now look at what this Badayuni said,

So this is the one who Haddad saw fit to quote from in order to rebuke
Imaam Muhammad Ismaa’eel Shaheed, the one who promoted and
allowed idol worship, need we say anymore.

Ahmad Raza Khaan “Our peer (holy men) can be present in every place in 10,000 places in 10,000 cities at one time” and he gives an example, “it was possible for Sayyidee Fathe Muhammad Quddus to be present in 10 different gatherings at once.” Then Ahmad Raza gives an evidence for this which was, “Look at Krishan Kehnayyah, he was a disbeliever and he would also be present in a number of places at once.” (Malfoozaat (1/141-142).

Ahmad Raza Khaan said in another book, “Shaikh Abul-Fath Jaunpooree was invited 10 times by the Messenger of Allaah (Sallalahu Alayhee Was-Sallam) on Rabee ul-Awwal to come after the Dhuhr prayer, so he accepted his invitation from every place. So someone asked him, “Oh sir you accepted the invitation from all 10 places and agreed to be (in all 10 places) after the Dhuhr prayer, but how is this possible.” He replied, “Krishan who was a disbeliever, would be in different places at one time, so Abul-Fath
can be present in 10 places, so then what is the amazement in this.”
(Ahkaam Sharee’at 2/192).

Ahmad Raza Khan said, “If someone is in the land of the disbelievers
residing in a village, for example if there are only hindus there and this person is unable to leave the place for some reason. So then tell us if a situation arises then who will he immediately ask (ie ask for a fatwa)? Then it will be said to him, “Ask the Pandit (a Pandit is a hindu priest).” (Fataawa Rizwiyyah 3/253)

Similarly on one hand Ahmad Raza Khaan held the nikah (marriage) of a Wahhabee to be invalid yet on the other hand he says if a Brahaman (A high form of Hindu priest) performs the nikah, the nikah will be valid!!!!! His exacts words, “The nikah will be valid as a nikah is the accepting of the vows, even if a brahaman performs it.” (Ahkaam Sharee’at 2/225)

So with the rabid soofee bareilwee’s, the church fathers of Haddad, the nikah if performed by a hindu brahaman priest is valid and what does a hindu priest recite, they recite nothing but from their holy books the Ashlook from the Vedas and Pauthiyah, because they do not know the Qur’aan and yet on the other hand if a follower of the Qur’aan, Sunnah, Hadeeth and aathaar, a Wahhaabee performs the nikah it is invalid!!!!!

It is not just marriage that is allowed, he Ahmad Raza Khaan allows their food whcih they distribute on their holy days. Ahmad Raza Khaan said, “Question, the sweets and other foods the kaafirs distribute on Haulee and Diwalee (Hindu and Sikh Festivals), is it permissible for the muslims to accept this or not? He replied, “Do not accept it on the day but if they give it to you the next day then you may take it.? (al-Malfoozaat 1/115).

So this bareliwee soofee is trying to say the hindus will be at the Pool of Kauthar because they call upon Muhammad (Sallalaahu Alayhee Was-Sallam) and are his true lovers!!!!

Ahmad Raza Khaan was influenced so much by the hindu religious books that his poetry full of shirk is written based on the hindu sanskrit. (refer to his despicable book Khadaa’iq Bakhshish 3/70)

He said in another place, “The mushriks of Hindh praise him by calling him Krishan and the mushrikeen of Arabia refer to themselves as Ibraaheemee.” Noor al-A’rfaan pg.590)

And this Ahmad Yaar Khaan Na’eemee said, “A religious hindu said to me, “The person you call Ibraaheem we call him Krishan Jee and we call Ismaa’eel, Arjun.” (Noor al-A’rfaan pg.492)