The World Of The Jinn And Devils 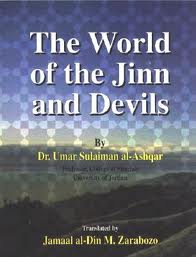 Some people think that writing about this topic is writing about a matter that should remain on the periphery of knowledge. They believe in going over this topic in the quickest of fashions and not giving it too much thought.

They think that the benefits of such a study are very limited, and that being ignorant of this topic is not harmful at all.

However, this is not an irrelevant matter. Humans today spend billions of dollars, with which they could develop countries and end poverty in the farthest reaches of the world, on research to discover whether there is any possibility of life on nearby planets. Scientists spend a great deal of their time and resources on this question. What about living beings that are known to exist right here with us on our earth? They live in our houses and they eat and drink with us. In fact, they affect our thoughts and our hearts and even drive us to destroy our own selves and to spill one another’s blood.

No price can be put on the importance of the texts of the Qur’an and authentic hadeeth that have reached us, giving us knowledge of this matter.

Those texts uncover for us the secrets of these fellow-creatures: the world of the jinn.

Jamaal Zarabozo
The Conditions of the Testimony of Faith ‘Laa Ilaaha ill-Allah’ – There is no diety worthy of worship except Allaah.

1) Verily, Allaah has created the world and everything in it in order to worship Him alone. He sent the Messenger to call the people to Tawheed and the Noble Qur’aan is concerned with the aqeedah of tawheed in most of its chapters, and it explains the harm of shirk for the individual and the society. Shirk is the reason for destruction in this life and the reason for eternal destruction in the Fire of the Hereafter.

2) Verily, all the Messengers began their call with Tawheed, which they were commanded by Allaah to convey it to the people. He, the Most High, said:

“We have not sent before you from the Messengers, except We inspired to him that He is the only One worthy of worship, so worship Him.” [21:25]

The Messenger of Allaah stayed in Makkah for thirteen years while he called his people to the Tawheed of Allaah and he called to Him alone without associating anything with Him. It was regarding this issue that Allaah revealed the following verse to His Noble Messenger:

The Noble Messenger brought up his followers upon Tawheed from the time of childhood and he said to the son of his uncle, his cousin ‘Abdullaah ibn ‘Abbaas: “When you ask, then ask Allaah, and when you seek help, then seek help from Allaah.” [Hasan Saheeh, Tirmidhi].

This Tawheed is in reality the religion of Islaam, which is built upon it, and anything other than it is not accepted by Allaah.

3) Verily, the Messenger sallallaahu ‘alayhi wa sallam taught his Companions to begin their call to the people with tauhid, so he said to Mu’aadh ibn Jabal, when he sallallaahu ‘alayhi wa sallam sent him to Yemen: “So let the first thing you call them to, be the testification that none has the right to be worshipped except Allaah.” And in another narration: “…that they worship Allaah alone.” [Bukhaaree and Muslim]

4) Tauhid is embodied in the testification that “None has the right to be worshipped except Allaah, and Muhammad is the Messenger of Allaah.” Its meaning is that there is no one who is worthy of deserving worship except Allaah, and there is no worship except that which the Messenger of Allaah came with. It is this testification which allows a unbeliever to enter into Islaam, since it is the key to Paradise, and the one who testifies to it and believes it enters into Paradise as long as he does not invalidate it by shirk or a word of disbelief.

5) The disbelieving Quraish offered the Messenger of Allaah sallallaahu ‘alayhi wa sallam kingship, wealth and wives and other than that from the pleasures of this life in exchange for him abandon the call to tauhid, and abandon the attacks against the idols. However, he did not desire that from them, rather lie continued his call and endured the onslaught along with his Companions, until the call to tauhid was victorious after thirteen years, after which Makkah was conquered and the idols were destroyed. The Messenger of Allaah sallallaahu ‘alayhi wa sallam recited, “Truth has come and falsehood has vanished, surely falsehood is ever bound to vanish.” [17:81]